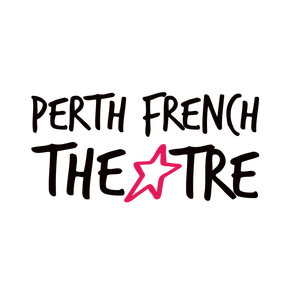 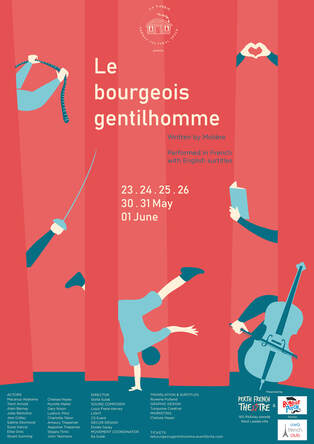 Le bourgeois gentilhomme is a five-act Comedy-Ballet in prose, first performed in 1670 for the court of Louis XIV at Chambord Castle by Molière's troupe. We will present a contemporary interpretation, bringing the words of Molière into the 21st century.

The "bourgeois" Mr Jourdain is so focused on becoming a "gentilhomme" or "quality person" that he ends up becoming quite crazy! His entourage misbehaves and makes him believe wonders: only his wife tries desperately to bring him back to earth. But she too will end up playing with him, because he is too blinded by his crazy hope of becoming someone! Becoming someone!

Mr Jourdain is surrounded by an array of comic characters. The masters: an aging dancer, an unscrupulous musician, an egocentric master of arms, an even more egocentric philosopher, and a crazy clothes designer. The household: a hysterical servant, two lackeys obeying like shadows, a despairing wife, and a daughter who wants only one thing: to marry who she wants. The guests: a seductive swindler who always has the right words to get what he wants, and a young, beautiful, elegant Marquise (who makes old Mr Jourdain dream)! Finally, there's the suitor of Mr Jourdain's daughter, and his devoted and devious friend! This team will find an outlandish way to unite all lovers.
CAST
Macarius Abatania, Trent Arnold, Alain Bernay, Jules Bertolino, Jessica Colleu, Sabine Desmond, Susie Garcia, Elise Gros, Stuart Gunning, Chelsea Hayes, Myrtille Mallet, Gary Nixon, Ludovic Pilot, Charlotte Taton, Amaury Thepenier, Appoline Thepenier, Stejara Timis, John Yeomans

PFT shows regularly sell out, so get your tickets early to avoid disappointment!
Past performances - Clic on the poster for photos/videos...